Get Travel Tips and Hotel Deals in Your Inbox

Top Things to Do in Vienna

Austria’s regal capital has everything from world-famous museums to buzzing nightlife, combined with fantastic restaurants and a rich history. With great travel connections by train or bus, Vienna is also a superb base to explore central Europe.

Its historic city center, as the former home of the Habsburg court and its many empires, is on the UNESCO World Heritage List. It is practically an open-air museum! The city, which rose as the imperial seat of the Holy Roman Empire, later became the capital of the Austrian Empire, and finally, the center of the Austro-Hungarian Empire has been beautifully preserved and restored.

As one of central Europe’s largest and most developed capitals, it has a modern vibe. Visitors come for the city’s famous electronic dance music scene, street art, and performances. Also renowned are the city’s hip restaurants and bars. When you’re not checking those out, here are the top things to do in Vienna: 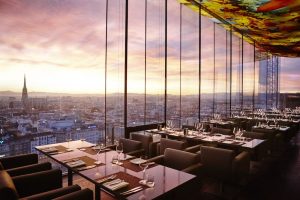 This world-class art museum features works by Raphael, Titian, and Caravaggio, alongside the Habsburgs’ art collection and impressive examples of ancient Greek, Egyptian and Roman pieces.

The well-known Opera House holds more than 300 performances from over 60 operas and ballets during its September to June season. There are always a number of discount tickets available. Each year it hosts the grand Vienna Opera Ball, the Austrian capital’s most glamorous high-society event.

Situated in the Judenplatz, the old Jewish Ghetto, this museum preserves the memory of the 50,000 Austrian Jews killed in the Holocaust. The museum carefully documents the once thriving Jewish community, the lives of famous members including Zweig, Freud, Herzl, and Mahler, and its destruction at the hands of the Nazis.

Once a medieval castle, this sprawling palace complex used to be the imperial residence of the Habsburg emperors. They lived there until the end of WWI. Your jaw’s bound to drop at the wealth and glamour of 19th-century imperial life on display. Get ready to be impressed by a visit to the Imperial Silver Collection. Don’t forget to check out the former residential and state apartments of Emperor Franz Joseph I and Empress Elisabeth.

This art museum houses one of the most important exhibitions in the country. The main draw is the world’s biggest collection by Austrian symbolist painter Gustav Klimt. It holds his masterpiece ‘The Kiss’.

The grand cathedral’s exterior is hard to miss. Make sure you head indoors to see the wonderful religious art, too, as well as the building’s mix of architectural styles. Try to also swing by the catacombs, which can only be visited on guided tours. The North Tower’s observation deck offers great views of downtown Vienna.

Open from mid-November to Christmas, usually from midday until late, most Viennese Christmas Markets are more about trying the local delicacies and drinking mulled wine than picking up souvenirs. They’re great places to chat with locals and eat and drink to your heart’s content. Spittelberg and Rathaus are two of the bigger markets. Many smaller ones spring up in other parts of the city through the festive period.

Vienna is a city with a rich past and present. There are so many things to do you could fill a week or more here. Choose a hotel from Triphop’s great range and get accommodation deals and travel rewards of up to 15% Cash Back for members. With more than 550,000 hotels worldwide, you can earn top Cash Back and hotel deals wherever your next trip takes you.

Save up to 60% on your favorite hotels